HomeShopDownloadableThe FORMULA (downloadable)
View cart “Magic Box” has been added to your cart.

FROM THE DESK OF ARTHUR STANLEY:

Most of you know who I am from my column writings over the years……and some from my many handicapping strategies. For over four decades I have offered my selection methods to the racing public. Some, like MORE HORSEPOWER and POWER LYNK were based solely on chart performances. Others, like ENERGEX and MONEY HORSE were more mechanical in nature. All are unique handicapping concepts that provide useful carryover knowledge that ultimately can be permanently applied to every player’s handicapping arsenal of information. And as it turns out, the granddaddy of all of my methods, THE EXPLOSIVE HORSE, was the concept that inspired me with the insight to develop my latest endeavor, one that I truly believe to be the most powerful combination of handicapping data ever released to the horse racing world!

Working in my Florida office last winter, the concept came to me like a tsunami! Maybe I could take the powerful conditioning concepts, as defined in the EXPLOSIVE HORSE, one logical step forward. Create an accurate selection system based strategically on readily available speed figures like Equibase of Beyers! After meticulously outlining my thoughts in writing, I pulled out a stack of old Racing Forms and began quickly checking out some races. The results were not good…they were startling!

I’ve produced winning concepts before, but none with the high percentage of predictability this method was showing. I now had the valuable ability to project when a horse was ready to explode with the big effort, on a simple and quick basis. My selections produced hard-hitting efforts, time and time again! All of the results were substantiated with intensive Beta testing and with my own personal play over a twenty week period. The numerous actual play examples will further bolster the fact that something of value was created here, something that I have been seeking for decades!

I finally found the “golden goose” of handicapping…I found THE FORMULA!

ARTHUR STANLEY’S FORMULA HAS DONE IT!

The FORMULA is an amazing handicapping advisory the likes of which you have never seen before. It is a selection technique that is completely unused by 99% of the racing public! The ingenious method produces a steady stream of high-priced overlay plays capitalizing on a precise sequence of crucial performance efforts and condition recovery situations. Prior to now, these lucrative wagering opportunities were only visible to those “in the know”. The FORMULA will now give you too the valuable ability to highlight the sharp and fit horse that is ready to run a powerfully “energetic” race. You will know when this race will be run, and more importantly…why!

Look at the chart of 3YO filly La Coronel who ran at Keeneland on October, 14

Can you see why this filly’s first race on 4Nov as a 2YO critically determined what she would do in her last race on 14Oct as a 3YO? The Formula clearly predicted this horse primed and ready for a dominating effort!

As another example of the FORMULA, look at the chart of The Player, a 4YO who ran at Keeneland on October 28.

Study this chart closely. Can you see why this 3YO’S race, run on 16Jul, clearly exhibited what you will learn to be a basic FORMULA performance sequence. A crucial move that “screamed” with the expectation of a strong performance for his next race on 28Oct? 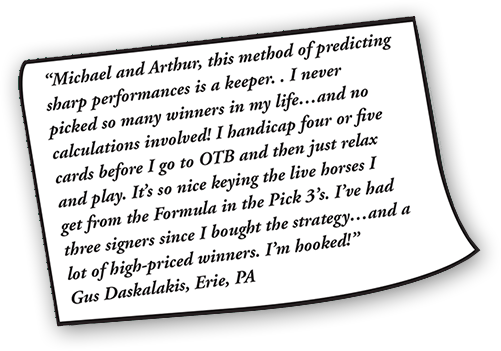 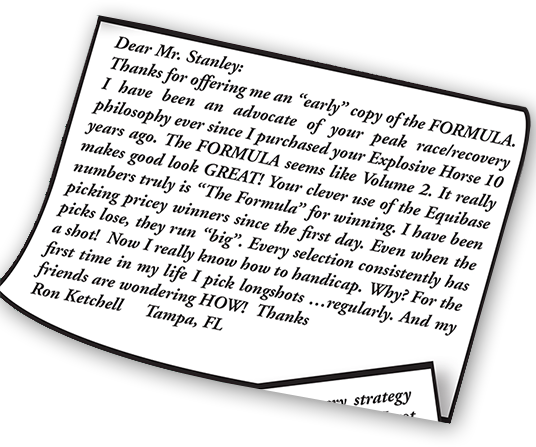 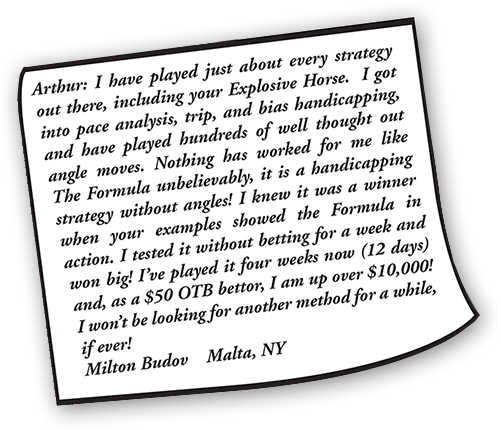 THERE WILL BE NO DOUBT

BULLETIN: Once the secret of The Formula is revealed, you will instantly see why its concepts cannot be refuted. Remember, the public only looks at the performances of the last few races in order to make their selections. The tote board odds are then established accordingly. Conversely, The Formula, was developed to predict a huge effort, up to twelve weeks before race day! This is why Formula selections consistently go off at high prices and always with great values. The documented results prove this. Past performances do not lie!

THE FORMULA IS THE KEY!

Once The Formula’s core handicapping concepts are understood, its great wagering potentials clearly will become apparent. Over fifty race examples were compiled over a recent four month period of “weekend-only” programs at tracks nationwide. Routes, sprints, turf, and dirt…we sampled them all in the effort to prove the overwhelming merits of our discovery. Each and every example highlights the prediction abilities of The Formula. All provide clear proof that the strategy works…and works well. You can break the races down in any manner! Go over them with a microscope! See for yourself how The Formula regularly selects live, sharp, horses that are ready to run…. every time…..with no conjecture!

There is one thing I am sure of in this business….”everyone wants the ability to pick winners”. There are many systems and methods available that can produce this. Fortunately, systems that pick chalk favorites are a dime a dozen. I know, we sell some of the best of them! Picking almost exclusively pricey longshots on a regular basis, with a strategically solid selection methodology…now you’ve got something. Particularly, a system that successfully uses readily available speed figures to quantitatively derive its choice, has never yet been developed….UNTIL NOW!

I am proud to be part of what many will consider Arthur Stanley’s greatest contribution to the art of thoroughbred handicapping. For over thirty years the Gambler’s Emporium has been the exclusive publisher of all of his copyrighted works. Specifically highlighted is The EXPLOSIVE HORSE, which has become the genesis of Arthur’s latest endeavor…The FORMULA. After reading The FORMULA, there is no doubt you too will realize that what we have produced here is an impactive handicapping weapon created specifically to generate high-priced, sharp runners on an everyday basis. No angles or vague probabilities, just solid handicapping principals employing a sophisticated application of readily available speed figures, with a catch! Make no mistake, this copyrighted material has NEVER been seen before. If you pick longshots now, you will pick more utilizing The FORMULA, this we GUARANTEE! If you don’t think The FORMULA is worth every cent, send it back for a full refund if not as promised! Arthur and I are confident that The FORMULA will be your direct pathway to the winners circle for years to come. It will be, for sure, the most creative handicapping process you have ever been exposed to, a process so exciting you will want to play it immediately. Get this knowledge, read it, and start cashing!!

The cost for THE FORMULA downloadable edition is $100